Where Internet Marketing is Headed in the Next Five Years

As long as the internet is around and businesses need to drive sales or traffic, hiring an internet marketing firm will remain an important part of the puzzle. However internet marketing is not always going to look the same as it does now. For example before the 2000s there was no social media in the way we view it today. In fact even 10 years ago Myspace was only just becoming popular, Facebook was still being developed, and Twitter had not even been conceived.

Today many businesses couldn’t even imagine not having a social media presence as part of their marketing efforts. But the internet evolves and in order to survive businesses must evolve with it.

Internet marketing companies are more savvy now than they’ve ever been, when it comes to looking ahead and adopting new strategies for their clients. So what can we expect in the next 5 years from internet marketing?

With web users being exposed to a record amount of information and ads, it’s increasingly important to keep things simple and visual, especially for those swiping away on mobile devices. The most successful campaigns on social media use big images and simple calls to action.

In terms of websites, people’s attention spans are getting shorter, so content needs to reflect this by being more concise and visual. With the rise of sites like Buzzfeed, which popularized the list based blogging method, it’s clear that this only going to become more prevalent in content marketing.

In the western world almost everybody has a smart phone, but it has still taken time for mobile 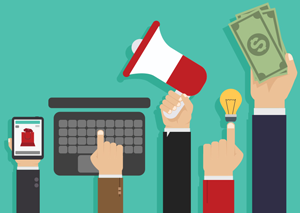 ad campaigns, apps, and mobile optimized web pages to catch up. This will only increase over the next 5 years, and there’s no telling the novel ways in which marketers will begin targeting phone users.

Research shows that 95% of people on the planet now have a mobile phone, 21% of which are “smart.” This is expected to increase to 50% by 2018 – making smart phone targeting an important aspect of internet marketing.

Internet marketing companies use a lot of powerful techniques and tools to target your desired audience, and this will only get more precise as the years go on. The internet itself is becoming much more segmented. If you wanted to, you could probably find a podcast for every hobby or subject there is. That also means there’s an advertising outlet for every product.

As the tracking of users and the interpretation of that data becomes more advanced, internet marketing should soon reach pinpoint precision.

Google search honcho Matt Cutts took the SEO world by storm in 2010 when he began using the term “social signals” and revealed the search engine was beginning to count social media activity in its rankings. Some internet marketers jumped the gun a little and believed that social media links and their viral appeal was now directly impacting the positions of web pages.

In 2014 Cutts clarified that Google’s crawlers weren’t necessarily treating social media any different than other web pages, and that it wasn’t practical to track viral appeal through social media, because the likes of Twitter and Facebook move too fast and are not permanent.

This might suggest that Google had fully intended to go in that direction, but the technicalities didn’t work themselves out. In 5 years it’s likely they will have perfected a new approach to using social media in their rankings. This will have a big impact on SEO and internet marketing.

Speak up! Let us know what you think.

Get the articles by email!